Henry Parrington was the son of William and Grace Parrington, née Hayes. William was born at Dent and Grace at Giggleswick, Yorkshire.

See also: ‘Guiseley Terriers: A Small Part in The Great War - A History of the 1/6th Battalion, Duke of Wellington’s (West Riding) Regiment’ by Stephen Barber (2018).

Click the thumbnail below to view a larger image. 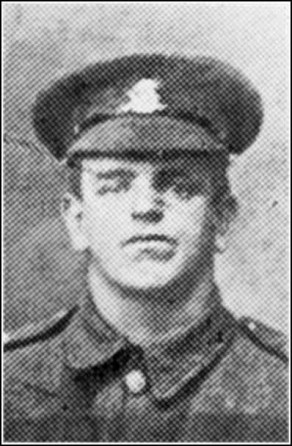 Died How: Killed in action

We regret to say that Mr. and Mrs. Parrington, 26 Rowland Street, Skipton, received a letter on Wednesday from Major Gilbert Tanner stating that their son, Private Henry Parrington, West Riding Regiment, was killed on February 27th. Major Tanner expressed his sympathy and explained that a shell fell on the dugout in which Private Parrington and two comrades were on duty. A party immediately set to work to dig the men out, and Private Parrington was alive, but unconscious, when he was brought out. All efforts to revive him, however, were futile, and he passed away without pain.

Mr. Parrington has also received a letter from his brother James, who mentions that his son helped to dig deceased (his cousin) out. Two days before his death Private Parrington wrote his parents a most cheerful letter, mentioning that he was with two Skipton lads named Clarke (Duckett Street) and S. Hudson, (Rowland, Street), and closing with the touching words ‘God be with you till we meet again’.

Twenty-four years of age and formerly a porter at Skipton Station, deceased enlisted in January 1916 and had been at the Front 20 months. His brother, Private T. Parrington, was recently wounded in the right arm in April last year, and has been in hospital at Liverpool, while another brother is also about to join up.

We are able to reproduce a photograph of Private Henry Parrington, son of Mr. and Mrs. Parrington, 20 Rowland Street, Skipton, and formerly a porter at Skipton Station, who, as recorded in last week’s ‘Herald,’ was killed on February 27th.

PARRINGTON – In proud and loving memory of Private Harry Parrington, 1/6th West Riding Regiment, the eldest son of Grace and William Parrington, who was killed in his dug-out on February 27th, 1918.

In health and strength he left his home,
Not thinking death was near;
It pleased the Lord to bid him come
In his presence to appear.
Some day we hope to meet him,
Some day we know not when.
To clasp his hand in the better land,
Never to part again.

PARRINGTON – In loving memory of Pte. Harry Parrington, who was killed in action February 27th, 1918.

Gone but not forgotten.

CRAVEN AND THE WAR

Mr. and Mrs. Parrington, of 26, Rowland Street, Skipton, have received a letter from Major Gilbert Tanner stating that their son, Pte. Henry Parrington, West Riding Regiment, was killed in action on Feb. 27th. He adds that a shell fell on the dug-out in which he was with his two comrades. A party immediately set to work to dig them out, and he was alive, though unconscious, when they got to him. All efforts to revive him were futile, and he passed away without pain. His brother (Mr. James Parrington) has also written stating that his son helped to dig him out. Two days before he was killed Pte. Parrington wrote home in cheerful terms, and mentioned that he was with a lad called Clarke, of Duckett Street, and another called Hudson, of Rowland Street, finishing up with “God be with you till we meet again.” He was 24 years of age, and was formerly a porter at the Skipton Station. He enlisted in 1916 and had been at the front 20 months. His brother (Pte. T. Parrington) was wounded in April last year in the right arm, and had been in hospital at Liverpool, while another younger brother is about to join up.

You can leave comments on this soldier record. Please note all comments will be manually approved before they appear on the website.

The CPGW Book & Other Sources

We love to hear from our users. If you have any questions about the CPGW website or the data records please send us an email.

Craven’s Part in The Great War relies upon donations and funding grants to operate and maintain the website and to update the servicemen and women record data as often as possible.